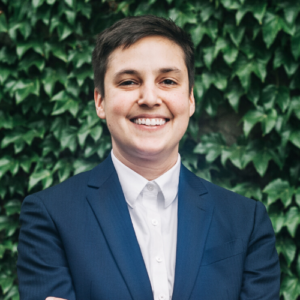 Ann Marie joined Klein Munsinger in 2019, bringing with her broad legal experience and a dedication to advocacy and justice. Before joining the firm, Ann Marie clerked in the fast-paced general jurisdiction Multnomah County trial court, where she facilitated over 25 jury trials and hundreds of other criminal and civil proceedings. During law school, Ann Marie held judicial externships at the United States District Court and the Oregon Tax Court, and worked tirelessly as a legal intern for the Oregon Innocence Project, where she investigated claims of wrongful conviction in Oregon.

Ann Marie graduated from Lewis & Clark Law School in 2017, earning a certificate in Public Interest Law, as well as the law school’s Community Service Award. Before law school, Ann Marie earned a Master’s degree in English, focusing her studies on men and masculinity in American literature of the Cold War era. A chapter of her thesis was published in the essay collection 1960s Gay Pulp Fiction: The Misplaced Heritage (UMass Press, 2013).
Ann Marie is currently an Executive Board member of the Queen’s Bench (the Multnomah County chapter of Oregon Women Lawyers), and she has also served on the board of OGALLA (Oregon’s LGBTQ+ lawyers association). Ann Marie is a member of the Oregon Trial Lawyers Association, the Multnomah Bar Association, the Washington QLaw Association, and the Labor and Employment Sections of the Oregon and Washington State Bar Associations.

When not advocating for her KM clients, Ann Marie enjoys mushroom foraging, cartooning, and hanging out with plants.

Ann Marie and Damien were both incredible throughout an employment discrimination matter they helped me resolve. From start to finish Ann Marie was prompt and polite. She was always available to speak and help me understand any questions I might have. Overall, I was more than impressed with how Ann Marie and Damien were able to take such a complicated matter and so quickly get to a resolution that exceeded my approvals/expectations.